Social Security has released the Fiscal Year 2021 disability award rates.  The initial level award rate of 36% has decreased by 3% from FY 2020, but it is still higher than it was from 2011 – 2018.   The reconsideration award rate is down 1% from last year to 13%, which it held at from 2017-2019.  The hearing award rate increased by 2% to 51% which is the highest it has been since 2012. This hearing award rate figure alleviates concerns of some that claimants would be disadvantaged by not having in person hearings as nearly all hearings have been held via telephone over the past year. Although we have not heard anything official on this subject from Social Security it would seem to make sense that going forward claimants will have the option of having their hearings in person or via video or telephone.

Social Security data is still illustrating that Disability Determination Services (DDS) has struggled with productivity over the past two years.  DDS receipts are down 7.5% and despite this decrease, pending at the initial claim level is up 26.4% and up 27.8% at the reconsideration levels.  DDS award volume is down 21% over this same time period.

The good news is that the hearing award rate is up and the hearing backlog has been reduced considerably. The average hearing processing time has decreased by 100 days. 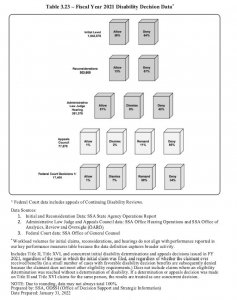